Congratulations to the Realm of Epoca for winning the launch server Alvorsted (S13)!

How does it feel winning the launch server Alvorsted (S13)?

I feel satisfied. And very proud. I was able to assemble this team within a day and a half.
-Manuel

Sad that it’s over.
-Pinkosa

Can’t wait for Alvorsted (S16), but I need a good team.
-Shannara

Glorious (waiting for that merch).
-killer-kitty

We wanted the game round to be more difficult, I think.
-mh2000

It was very cool to be part of Epoca, and Pinkosa is awesome!
-Nekomata

Any close calls during the round, or nervous breakdowns?

We were waiting for an enemy alliance that never fully formed.
-mh2000

We had more fun smashing Goblins in the end because that alliance wasn’t formed.
-Shannara

The situation prior to the endgame was that Silver Seals and Brazen started recruiting island-4 realms to team up against us. In total it could be a 6v1 if they succeeded, but Seals of Pain and Alte Sacke did not enter their plot. Which we really appreciated; it transformed the outcome completely. After all, 120 warlords are 120 warlords! So, I think it is fair to mention them here.
-Pinkosa

About your team, how much of it was formed before the round started?

Manuel pulled all his connections to form the team, and then Pinkosa did a lot of the actual leadership.
-Aavild

Building this team so fast was indeed pretty incredible.
-Nekomata

Many of the players I know decided to take a break from the game, but when I heard this was going to be the first official round with merch packages to the winners, I decided to scramble the group. I started DM-ing like crazy, and all but one joined the realm.
-Manuel

I want to say one important thing. Even though we had several ranks given out, everyone had Leader rights from the beginning. And that’s because we trusted each other completely. Next to that, Pinkosa became our Communications Manager early in the game when life went to shit for me for several weeks. Pinkosa took over the role as a true Leader and managed to keep everything going.
-Manuel

Epoca was made of incredible people behind the accounts, and we had very good times! I feel sad that it ends, even though this was a very demanding and sometimes stressful round.

I will miss them all.
-Pinkosa 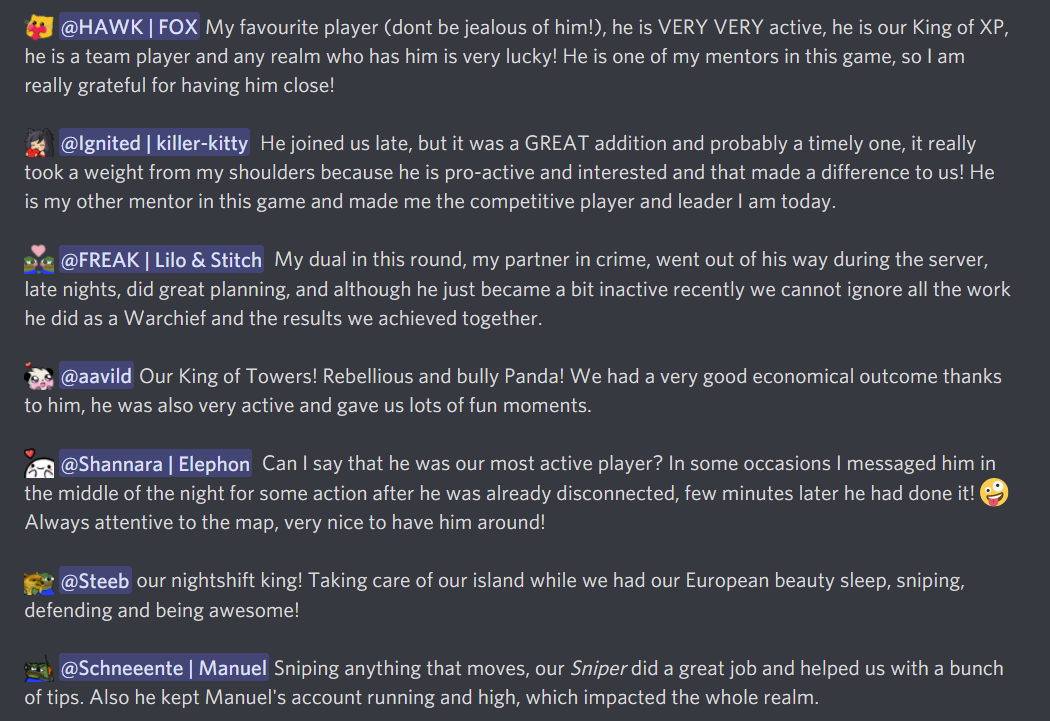 And who was the class clown?

Aavild for sure, let that be clear from the start. He’s the one and the only person who got our name changed several times…
-Manuel 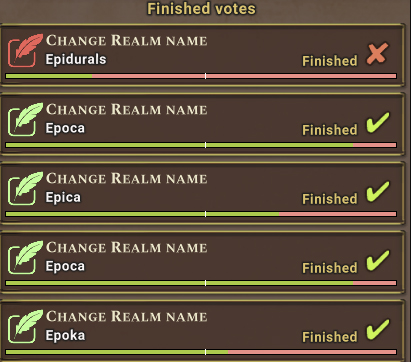 Aavild for sure! No questions asked. Baby panda clown.
-Pinkosa

Excuse me for having an unpopular opinion.
-Aavild

What happened if opinions clashed in your realm?

There was nothing better than to say something which clashed with the others, then give in to the popular opinion and watch the others as they realize I was right all along.
-Aavild

THIS HAPPENED AS WELL

Anything we forgot to ask, and you can’t wait to tell?

As you can notice even now, we've had a lot of fun with each other with a lot of jokes. I know I've said it before but respecting each other really makes your teamwork great. I've had some big real-life issues and I didn't have to worry about the realm for a second. Everyone just communicated as one. A big show of leadership made me really proud and made me shed a tiny tear. I just want to thank everyone officially again here.
-Manuel