What are our intentions behind the Concept?

The current Endgame has a few issues and missed opportunities we want to improve on. One of the most important points is to let the top Realms enjoy the full time of the endgame with the strategic most interesting content: The fight for Towers and Orbs. The weakest Realms in contrast get a clear and realistic goal they better can act on: Surviving on their island as long as possible. Also, we want Eternal Orbs not to be an alternative winning condition but to serve the Orb ranking. They will have the same value as normal Orbs but can't be stolen. So a lot of Eternal Orbs are produced during one cycle of an Anvil being open and Realms already get some for holding the Anvil for a shorter period of time.

Once the three sacred Moons align and form the Full Moon Trinity, the Eternal Anvils of Arkheim shall activate.

With the power of the Moons, they will forge the Eternal Orbs.

Divine artifacts that hold the Power to reach Eternal Light...

What happens during Endgame?

The Endgame is the last 2 weeks of a game round, weeks 9 and 10. These 2 weeks will determine who wins the game round. Once the Endgame begins, the following will happen on all islands:

What is the Goal of the Game?

With the new Endgame, the scoring change. There is no priority of Eternal Orbs anymore, but they are simply added up with normal Orbs held. Also, Realms with 0 Orbs are not ranked by their amount of Orbs but by the time they survived on their island.

At the moment, the Game World ends, for each island a final ranking happens:

Each island will have 4 Eternal Anvilsthat will generate Eternal Orbs over time. By conquering and holding an Eternal Avil Eternal Orbs are produced for the Realm over time.

On each island, the 4 Eternal Anvils, called Samuda, Duka, Magga, and Niro, will spawn on certain positions of the map: 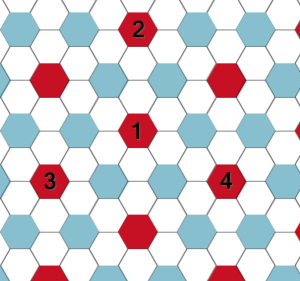 Each Eternal Anvil is active for 12 hours per cycle. Every time an Eternal Anvil activates, Demons spawn, and a 12 hours countdown begins. The Eternal Anvil will stay active until this timer runs out. Battles at Eternal Anvils can only be performed by Fallen, the same troops that you have used for the Dungeon before Endgame began. Lead your Fallen to War: If a Realm defeats the Demons: Eternal Anvil - Active & being held by a Realm

The battle for Eternal Orbs

The Realm holding an Eternal Anvil will receive Eternal Orbs while controlling that Anvil.

The moment the 12-hours timer runs out, the following happens:

Realms can be defeated

During the Endgame, a Realms gets defeated, instead of relocated if it does not own any map objects besides the Ark anymore (Towers, Goblin Forts, Anvils, and active Portals). The longer a Realm "survived" on an island, the higher it gets ranked in the final ranking. If it survived until the end, it's Orbs count instead.

If a Realm has no map object left, a grace period might apply.

If a Realm manages to get control of any map object, the countdown is stopped and not reset.

Grace period depending on the island:

Once the Endgame begins, the timer on the central Eternal Anvil begins.

The Realm controlling an Eternal Anvil will have the possibility to activate a fighting strength bonus of 30% in defense of this Anvil by donating resources:

This Bonus can not be taken over and all already donated resources or the acquired bonus will be lost when the Anvil closes or another Realm takes control.