Two new Warlords are joining the rows of Arkheim's armies. And with their arrival, a new era begins.

more content is nearing the shores of Arkheim and as usual, we would like to hear your feedback about the current development concepts that are work in progress. We would therefore like to invite you once again to a Discord-Dev-Talk with our game designer DarioR. Join us on Discord on Friday 26.11.21, starting at 4:00 PM CET to give us feedback and discuss the following planned content:

With the next update, two new late-game Warlords will be introduced: Meet Yinfir and Aila!

Nobody knows Yinfir's actual age, nor would they dare to ask. But, if a painting could capture eternity, it would be Yinfir. Stories from Tales 'n Ales say he looked exactly the same when teaching battle strategies to other yet-to-become Warlords when they were still children. His knowledge of war, unrivaled, his methods, dominating. "Master Yinfir," they used to call him - and still do - when they fight side by side on the battlefield. 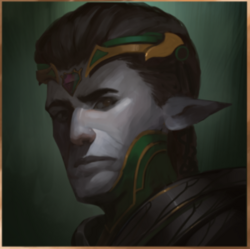 "Age is just a number, and like my body count. Endless. - Yinfir

When Aila arrived at the shores of Arkheim, she was keen to continue her passion (outside of sparring) for botany, quickly discovering and documenting unusual plants and herbs for her research. But, after an unusual allergic reaction to one, she swiftly climbed the ranks to Warlord status, achieving extraordinary results no one had ever seen in battle before. Of course, nobody knows what that herb is and where she got it from, but she doesn't seem willing to share her secrets. In battle, she might look ethereal, but she's incredibly deadly. 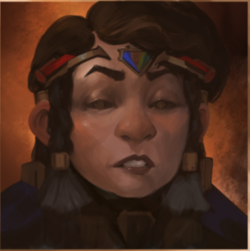 "Bring your very best Warlords... You're going to need them." - Aila

Players will now be able to have dedicated roles. Roles indicate the specific responsibility a member has within the Realm. All special roles have leadership permissions (except the Sentinel) with the only difference that non-leaders cannot assign or change roles.

A Realm member is the default role for any player inside a Realm. When changing to another Realm, this role will become your default one.

A Sentinel is responsible for defending the Realm if necessary by commanding Warlords on watch. Their only additional permission is to command Warlords that are on watch.

A Tower Master is responsible for directing Tower constructions and dismantling, setting and highlighting Tower pins, and building Portals.

A Diplomat is responsible for inviting and accepting players into the Realm and declaring wars, and NAPs. They have all Realm leader rights except assigning Realm roles.

A Strategist is responsible for planning attacks and defense, highlighting pins such as support, attack, and command Warlords on watch.

A Realm leader is responsible for leading and overseeing the Realm. They have access to all rights and can assign and change a Realm member's role. Realm leaders cannot change the role of another Realm leader.

A Tower that was previously enhanced can now be upgraded even further to "Realm Tower". The moment a Tower becomes a Realm Tower, it is no longer assigned to a player's Tower Slot and instead belongs to the Realm as a whole, meaning that the Tower slot that was previously occupied by that Tower, gets freed. This upgrade costs Ark Energy and its cost is calculated as if it was a new Tower enhancement.
Just like Tower enhancements, upgrades to Realm Tower can be done only by Realm leaders or members with other advanced permissions (higher than Sentinel).

Boosted troop research in the Academy

To offer more options for Soul Energy usage and to speed up the research of troops in the Academy, the following changes are being considered.

NOTE: At this point in time, these considerations are thoughts in progress. The implementation is not set in stone yet and is planned for a later update:

We are looking forward to hearing your thoughts about these changes and see you on Friday 26.11.21, starting at 4:00 PM CET on Discord!