Sooner or later you will get to the point where you have to leave your comfort zone and attack or conquer an enemy’s tower to fight your way to the top. But, just like in a real war, for inexperienced warriors an attack might have fatal consequences if not done correctly.

But don't worry. You don't have to go to war flatfooted. The Training Grounds are here to prepare you and your Realm for the real deal on the battlefields. And also: It literally trains your Warlords and increases their level. 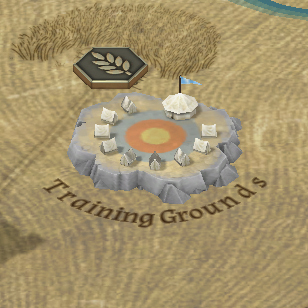 The Training Grounds will give you:

How to use the Training Grounds?

Every 12 hours one training point gets generated. Up to 3 of them can be accumulated.

Assigning a Warlord to a training works like a joint attack:

One player has to initiate the “attack” to the training ground and other players from the same Realm can join. To do this, each player has to select which Warlord shall be sent to training. Only Warlords that are stationed in the Ark are allowed to join this mission type.

Each player can send only one Warlord at a time.

Once the Warlord is selected, the attack will be queued until 4 training partners have joined the mission.

Once all 4 Warlords are ready, they will approach the Training Grounds with the speed of the slowest Warlord of the group. The movement on the map is visible for your Realm members only and the mission time is set to 0, meaning that the training is completed the moment the Warlords arrive (just like attacks on Goblin Barricades).

What happens during the training?

Once the 4 participating Warlords arrive, a 2 vs 2 battle begins.

The rules of the fight are the same as in every other PvP fight, except you don’t actually lose the defeated troops. This gives you the opportunity to experiment and try out different tactics - without taking any risks!

If, for any reason, a Warlord does not show up at the Training Ground (e.g. because a player left the Realm) the fight will happen without that Warlord. If on one side both Warlords are missing, the other team wins by default.

Once a training fight is concluded, each player receives the following rewards:

The XP values for Elven troops can be found HERE, for the Dwarven troops, look HERE.

Dev-Diary: Level up Warlords and Units