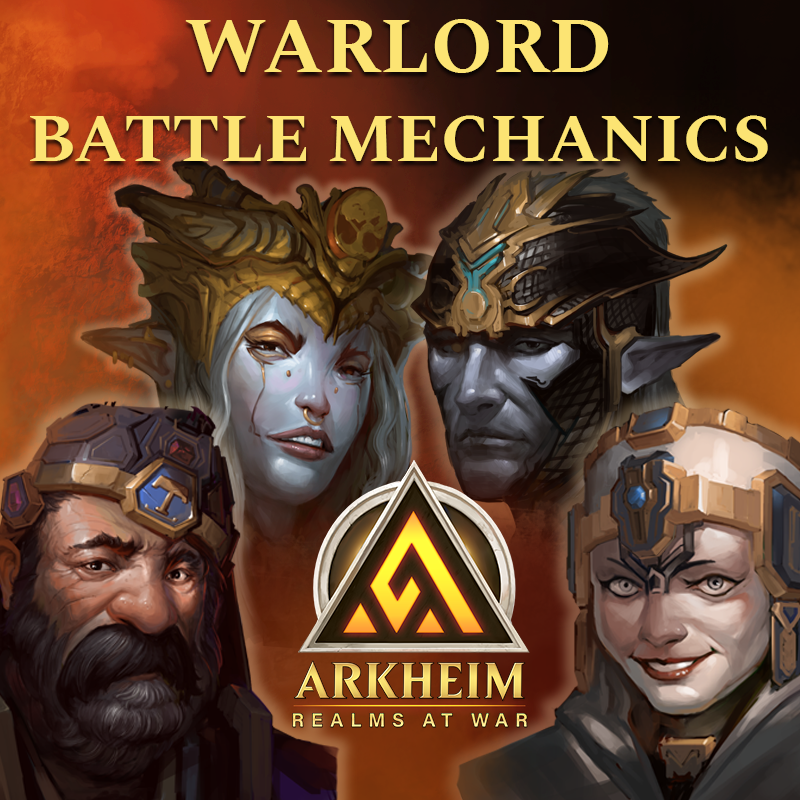 Each Warlord has 3 troop slots. When a battle begins the troop slots are being sorted so that for each Warlord the slot with the highest fighting strength is on top, then the second-highest, and finally the third-highest.

For each of the 3 slot pairings, the initiative is compared and the slot with the higher initiative strikes first.

The attack order in the example above (if we consider only the Base-Initiative) is indicated with the red numbers: 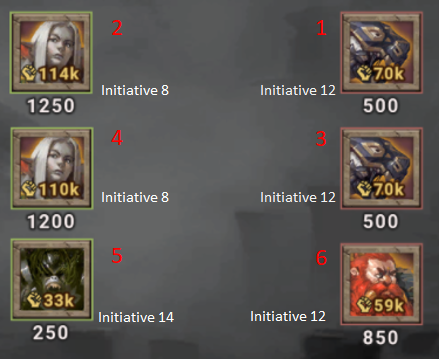 When 2 competing slots have the same Initiative, the slot with the lower troop amount strikes first.

In many cases, additional effects add to the Initiative of the troops: 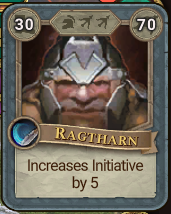 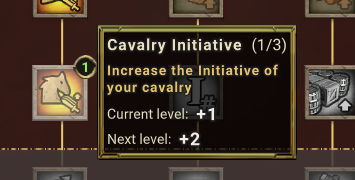 All bonuses are added to the troop's base-initiative stats before the battle begins. Then, when the order is defined, the slots strike, dealing damage to each other.

There are 2 terms when it comes to calculating the impact of an attack:

The damage of a strike is dependant on:

Just like for Initiative, for the fighting strength different bonuses can apply through Warlord powers, items, or points in the skill tree. Once all bonuses are added to the base stats, a formula is executed to determine the base Damage.

Let's take the example from above. For the sake of simplicity, we are ignoring fighting strength bonuses and will look at the base stats only.

Warlord Talindra has a slot with 1250 Slaying Mantis in it. Slaying Mantis have a fighting strength of 66. Both numbers are taken into account for the damage calculation.

Once the base damage value is determined, several other steps follow before the final damage is decided. For example, Talindra's Warlord Power "Increases damage of army by 25%". This means we multiply the base damage by 1.25. Also, chances like blocking part of the damage and reflecting damage, as well as crit-strikes are applied at this point.

After calculating the effects of the Warlord power, the chance-based items are triggered next.

In our example, Talindra is wearing a Legendary Greatweapon of fortune. It means there is a 25% chance to land a crit strike. If successful the above value would be multiplied by 1.5 again.

Eventually, the final value is thrown at the enemy's 3 unit slots.

To determine how many units the enemy loses to this damage value, the following aspects are taken into account:

In the example above, we have a stack of Slaying Mantis attacking the enemy. The enemy has 2 x Thunderjaws and 1 x Cratemaker. The base fighting strength stat of Thunderjaws is 140, the Cratemaker has a base Fighting Strength of 70, meaning that the base defense of the Thunderjaws is twice as high.

However, on the other hand, Slaying Mantis has the Troop ability "+100% damage against Cavalry", meaning that it's dealing twice as much damage to Thunderjaws than to Cratemaker. As a result, all 3 Slots receive the same damage and will (coincidentally) lose the same amount of troops.

When does a Warlord lose?

Each Warlord has an individual amount of Morale. This number shows, how much percent of the Warlord's troops must be defeated in order for the Warlord to retreat. For every 1% of troop losses, the Warlord loses 1 Morale point.

If the Morale drops to 0, the Warlord retreats with the remaining troops.

The events when 2 sides initiate a fight are: