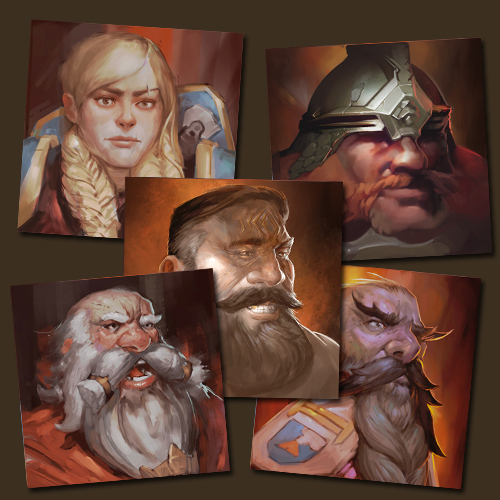 Who are the Warlords?

Warlords are the chiefs of your armies. You command your Warlords and lead them to battle, together with their troops. No Warlord is like another. They all differ a lot from each other. Not only by their name, appearance, personality and leisure activities, but also by their attributes, troop-slots and skills on the battlefield. Here are the most important factors you should look at when choosing your Warlords: 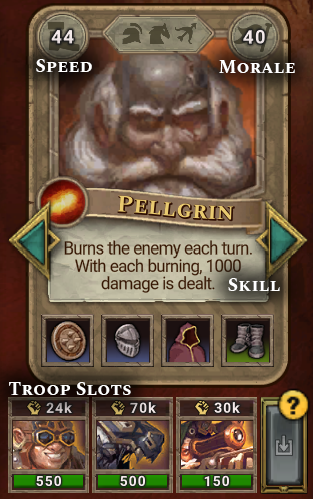 Each player starts the game with 1 Warlord. Additional Warlord slots are unlocked when the player reaches level 15, 20, 30, 40, 45, 55, and 60. That leads to a maximum of 8 different Warlords that can be commanded by a player. With 15 players per Realm, a Realm can have up to 120 Warlords.

Each Warlord has 3 troop slots. Each troop slot carries a stack of units, belonging either to the type infantry, cavalry, or artillery. Each stack has a certain size. In the example above our Warlord Pellgrin carries 550 Detonatresses (Infantry), 500 Thunderjaws (Cavalry), and 150 Riflemen (Artillery), resulting in a total fighting strength of 124K. Consider that different troops not only have different fighting strengths and initiative values, but each of them also has an ability.

This allows for a big variety of possible Warlord-troop combinations. Avoid always using the best troops you have for every kind of mission. You might sacrifice good and expensive troops unnecessarily. Analyze what kind of foes will face your Warlord and equip the Warlord with the troops that are ideal to defeat the enemy efficiently. 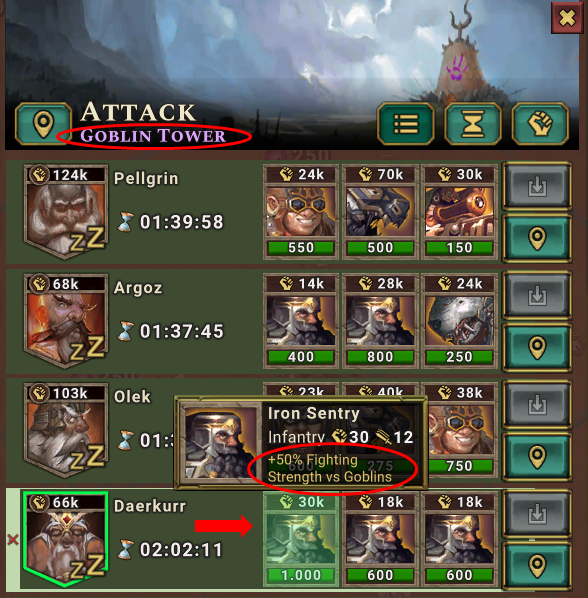 See all Troops and their stats and abilities in the respective Threads:

Each troop type has a base fighting strength that can be upgraded during the game round. Those upgrades can be made in the Academy, which unlocks once you upgrade your Citadel to level 12. 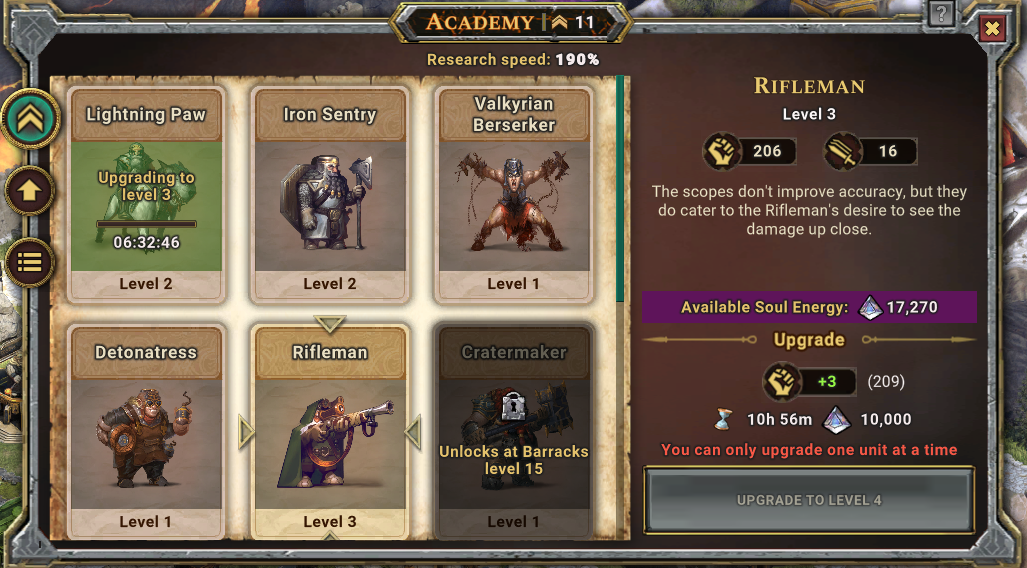 Each unit can be upgraded (researched) up to 9 times and those unit researches usually take a long time. You can decrease the research time by leveling your Academy though.

One way to improve your Warlords is the Mastery Tree (aka the Skill Tree).

The Mastery Tree lets you distribute Mastery points. Every time you level-up, you get one free Mastery point you can spend on the Mastery Tree to improve certain aspects, like better resource production, shorter building times or faster and stronger troops and bigger troop slots. Mastery points can also be reset with the Scroll ‘Light of the Phoenix’. This allows you to focus on different aspects during different stages of the game. For example, at the beginning of the game you can invest Mastery Points in resource production and more strength in the Dungeons and in the later part of the game, you can redistribute them and put them on higher Warlord speed and stronger/faster troops as fighting strength becomes more important for PvP. To reset your Mastery Points, all your Warlords must be stationed at the Ark. 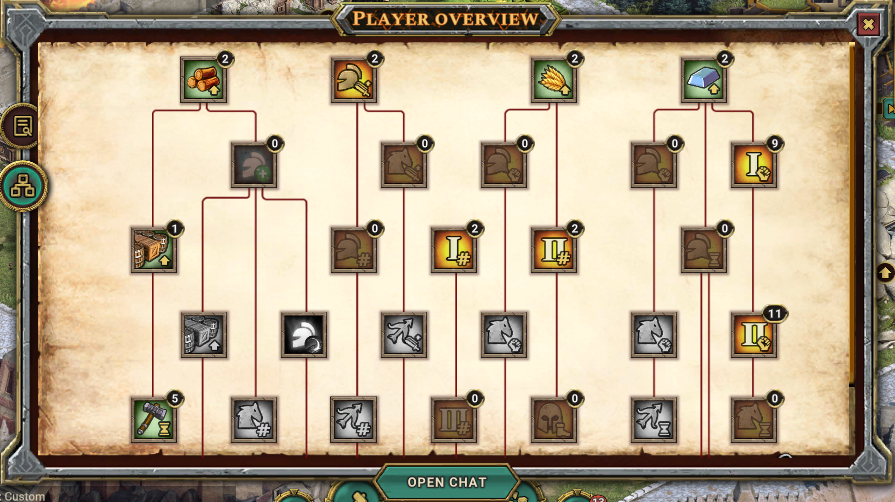 The speed value of Warlords indicates how many tiles a Warlord travels per hour on the map and varies between 20 (very slow) and 50 (very fast). Sending fast Warlords to missions means that they have a shorter traveling time and arrive faster at their target. There may be situations when the strength of the Warlord matters more than their speed or vice versa. Before sending Warlords on a mission, consider if timing is an important factor. The timer in the Warlord selection screen tells you how long the travel time for each Warlord would be, and at what time they arrive. If you send multiple Warlords at once on a mission, they all will travel with the speed of the slowest Warlord of the group. Adding slower Warlords further delays the mission which is indicated with a red timer in the WL selection screen. 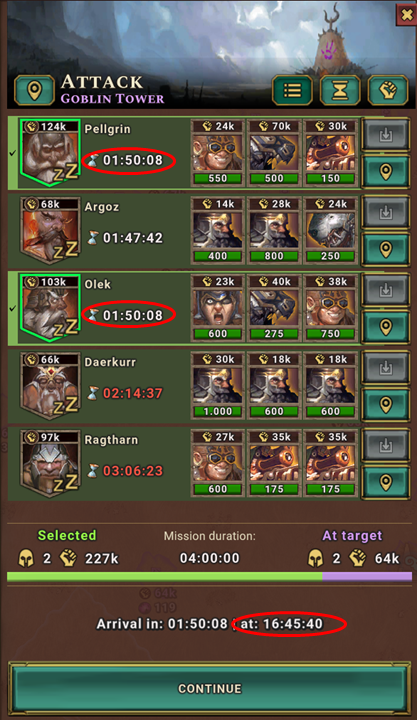 This value indicates how much percent of the Warlord’s troops must be defeated in order for the Warlord to retreat. Each round in battle, a Warlord loses some troops to the enemy's attack. If a Warlord carries a total of 2000 troops and has a Morale of 50, this means that the Warlord is defeated as soon as 50% of his 2000 troops are killed. In this case, the Warlord would withdraw from the battle with the remaining troops. A low Morale is not necessarily bad. A Warlord with a high Morale can stay longer in battle, increasing the probability to win the battle, but it also means that the Warlord can lose more troops during this battle. A Warlord with Morale 100 who is sent to a battle that he cannot win, will lose (waste) all his troops and return alone, while a Warlord with Morale 30 will lose only a small part of his army, before returning with the surviving 70%.

Warlords get XP when they lead their units into battle or fight on the Training Grounds. Each Warlord starts with level 1 and 0 Skill points. With each additional level, the Warlords get an additional Skill point that can be invested.

You can invest the skill-points to increase:

Each of them can be upgraded up to 5 times. The possible max-level of a skill depends on the Warlord level (Not to be confused with the player-level). 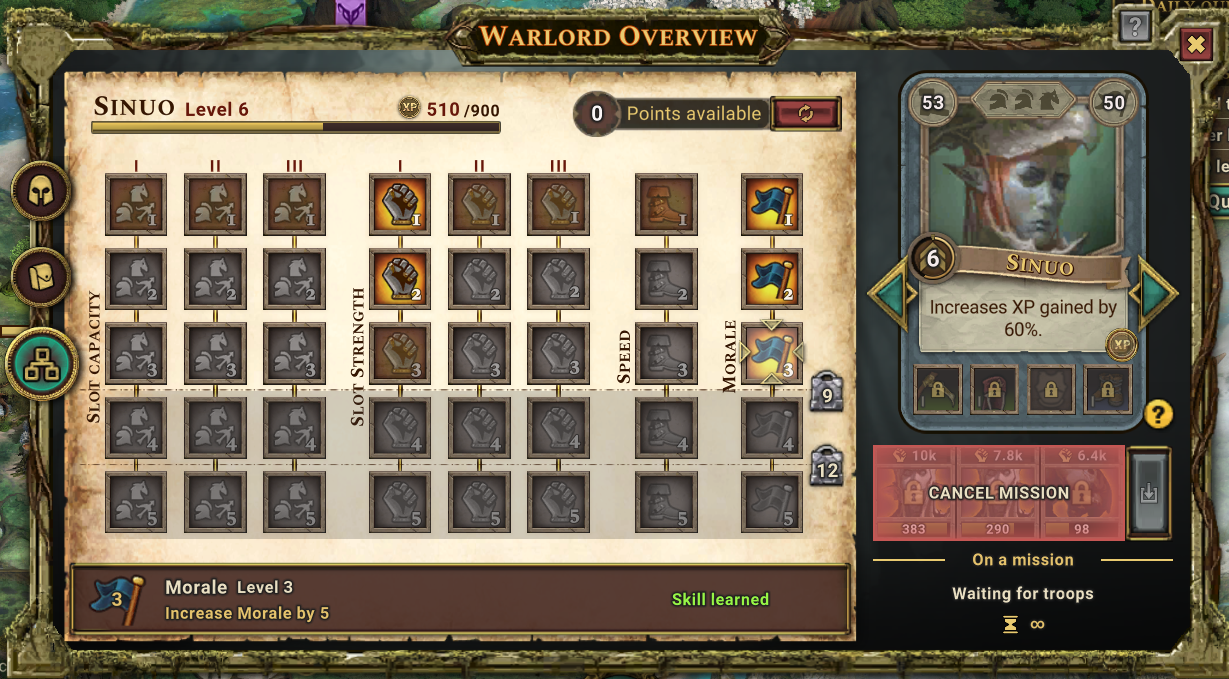 Every Warlord has an active or passive skill. A passive skill is a permanent bonus, like “Increase fighting strength of the Army by 15%”. An active skill applies once per turn during a battle, for example “Resurrects 35% of units after each turn”.

Also here, the right choice of your Warlord depends on the situation. If you aim to level up fast, a Warlord with the skill “Increase XP gained by 60%” can help you with that. If you are planning an attack with a large number of Warlords, you may want to choose a Warlord who benefits from the large group with a skill like “Each allied Warlord increases this army’s damage by 3%”.

This Warlord deals an additional damage of 1000 to the opposing Warlord’s troops after each turn.

See all Warlords and their stats and skills in the respective Threads:

Exchange you Warlords when needed

Whenever a new Warlord slot is unlocked you can choose the Warlord you want to use for that slot. However, once the Warlord is selected you can always change your mind and swap him/her for another one. To do this, click on the “Manage” button and choose any other of the available Warlords. To exchange a Warlord, the Warlord must be stationed at the Ark. 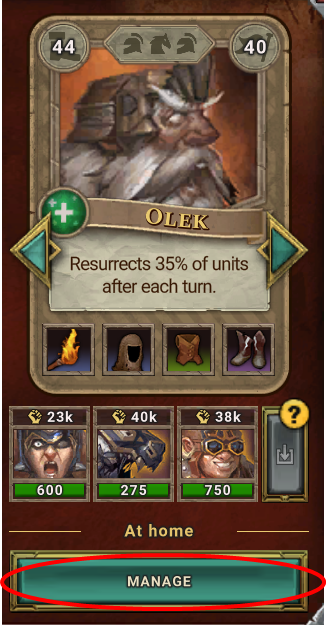 The slots of a Fallen Warlord are filled with Fallen troops (those you normally use to clear the Dungeon) to attack and conquer the Eternal Anvils.