The Items of Arkheim

No Warlord should go to battle naked. You can equip them with items that give your Warlord bonuses of different kinds. They may increase the initiatives of a particular troop-type, increase attack or defense values, increase the percentage of XP you gain during a battle or increase certain probabilities, for example, the probability to deal critical damage, resurrect troops, or poison the enemy’s troops. Equip your Warlords wisely. A bow increasing the strength of artillery units is useless on a Warlord without artillery units. 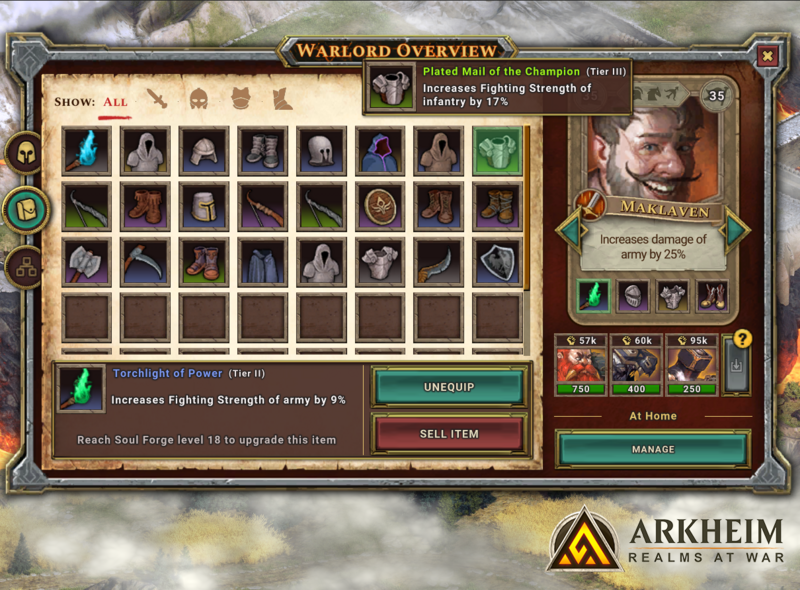 Items have different qualities and tiers indicating the strength of the item. The color of the item indicates the quality:

The quality of each item can be increased by enchanting them with Soul Energy in the Soul Forge. To find out more about it have a look at the Soul Forge article.

Apart from the quality, there are 5 different Item tiers. The higher the tier, the better the item. A legendary item of a higher tier will always be better than its lower-tier version.

Where to get items?

Items are looted from quests and battles with Demons. Demons can be found:

After every successful dungeon fight, you have a chance to get an item dropped. The items type and quality is random. The more you advance in the dungeon, the more likely it is that you get items of a higher tier. 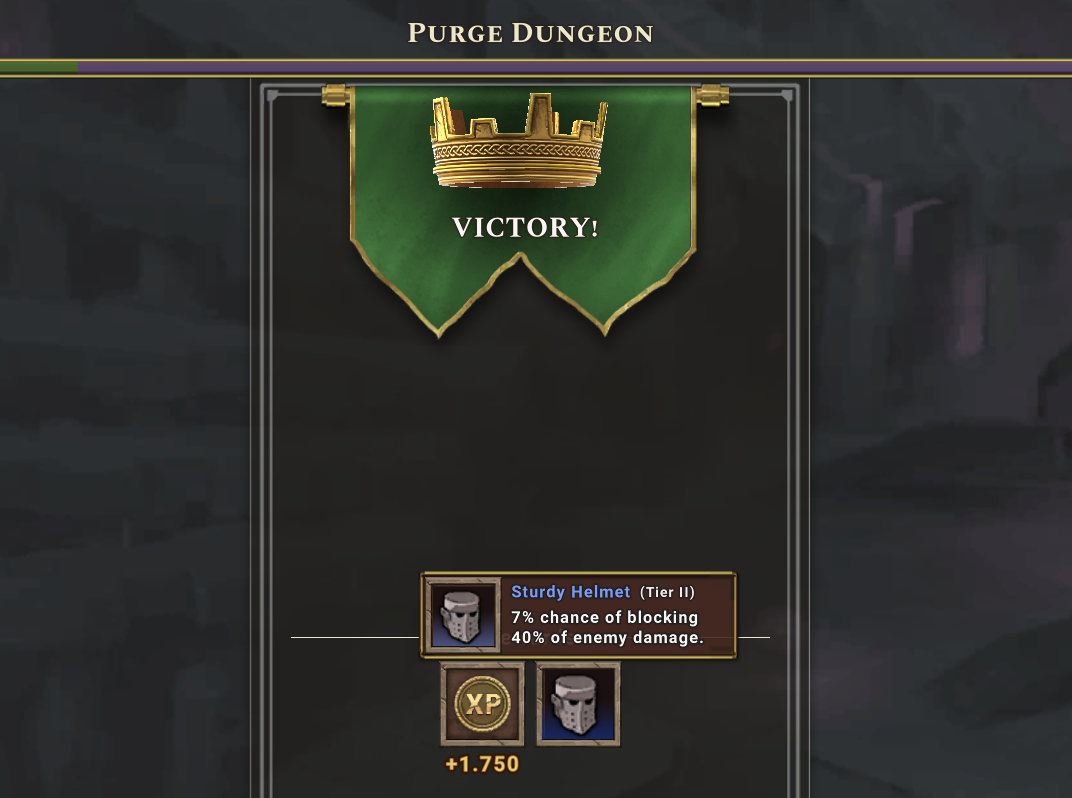 At the Eternal Anvils:

Every time an Eternal Anvil activates Demons spawn there. A Realm that successfully defeated the Demons at an Anvil will be greatly rewarded. Each Realm member who participated in the battle receives a random Tier 3 item. 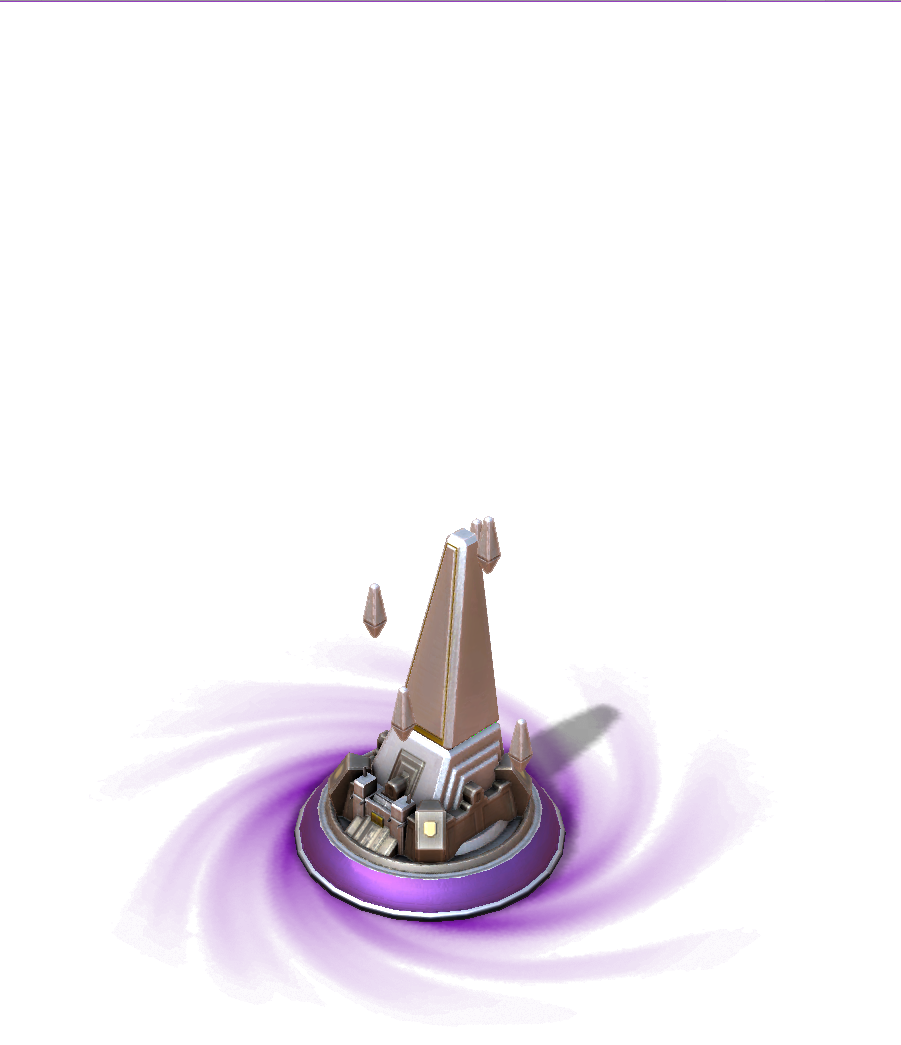 The following list of Item mechanics describes how different items work in battle:

There are items that grant a chance to land a crit strike. Critical damage means that the damage of a strike is increased by +50%.

If a Warlord carries an item that gives a 15% chance of critical damage, then the system checks at every strike if the crit damage is triggered.

If two or more items of this type are equipped, the percentages do not add up. Instead, the system performs one check for each item: First, the check is made for the item with the highest percentage. If the crit strike does not trigger, the next item is checked, and so on. Once the crit damage applies, the remaining items of this type are ignored (since the crit damage can apply only once per strike).

There are also Warlords with the skill of landing a crit strike with a certain probability. In this case, the system performs the check first on the Warlord skill, and if it fails it will continue with the items.

Those items give you a chance of resurrecting a fraction of your defeated troops after each round. At the end of each turn (after both Warlords finish striking with their 3 troop stacks), a check is performed if troops are resurrected. The percentages on the items do not add up. Each Item has its own resurrection check. So, resurrection can be triggered multiple times within the same round if more than one item-check (or Warlords skill) is successful.

Those are items that increase the XP the Warlord generates by defeating enemy troops. The bonus applies only to the XP gained by troops that are defeated by that Warlord. XP of troops defeated by other Warlords don't get the Bonus. XP bonus values on all items and/or Warlord skills are added up.

The fighting strength of certain troop types (infantry, cavalry, and artillery) can be increased on the Mastery Tree, with Warlord skills, and specific Items. All Fighting Strength bonuses are added up.

Blocking means, that a part of the damage of an enemy strike is blocked. There are also items that do not only block a fraction of the damage but also through it back on the enemy troops (Reflection).

Warlords carrying those items have a chance to either block or reflect a part of the damage of an incoming strike. Just like for Crit Damage Items, if two or more items of this type are equipped, the percentages do not add up. Instead, the system performs one check for each item on each incoming attack: First, the check is made for the item with the highest effect. If the block or reflection does not trigger, the next item is checked, and so on. Once the block or reflection applies, the remaining items of this type are ignored.

The initiative of certain troop types (infantry, cavalry, and artillery) can be increased on the Mastery Tree, with Warlord skills, and specific Items. All Initiative bonuses are added up.

Some items make your Warlord move faster on the map, reducing traveling times. The Warlord Speed can be increased on the Mastery Tree, with War Runes, and specific Items. All Speed bonuses are added up.

During Endgame, Warlords strongly increase their speed if being transformed to Fallen Warlords. The increase after the transformation applies only to the base speed, not the additional bonuses.

Some items give your Warlord a chance of dealing direct damage. Direct damage is a fraction of the current fighting strength of the Warlord's troops. The Item-check applies at the end of every turn. So if at the end of a round the Warlord has a fighting strength of 200K and carries an item with 20% chance of dealing 5% direct damage, the check is performed, and if successful, the Warlord performs an additional attack dealing 5% of 200K (=10K) damage to the enemy troops.

When attacking, a poisonous weapon gives you a chance to poison the troops of the enemy Warlord. The check on the poisoning is triggered every time your Warlord strikes. If the poisoning is successful, the enemy's troop slots get a poison-mark. 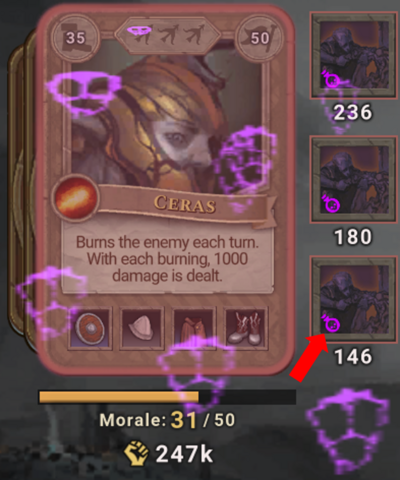 List of all Items that can be found in Arkheim